We have canonized this saint with a marker on her grave.

NEVER AGAIN!
A SACRED LIBATION CEREMONY will be held to honor their memory and humanity. It will take
place at 3:00PM Sharp on Sunday, March 30, 2014 at Congo (Washington) Square
6th & Walnut Streets Philadelphia, PA. 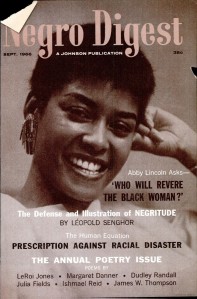 Abbey Lincoln on cover of Negro Digest for September 1966 containing her essay “Who Will Revere The Black Woman?”

Who Will Revere the Black Woman? *

Mark Twain said, in effect, that when a country enslaves a people, the first necessary job is to make the world feel that the people to be enslaved are subhuman. The next job is to make his fellow countrymen believe that man is inferior, and, then, the unkindest cut of all is to make that man believe himself inferior.

A good job has been done on the Black people in this country, as far as convincing them of their inferiority is concerned. The general white community has told us in a million different ways and in no uncertain terms that “God” and “nature” made a mistake when it came to the fashioning of us and ours. The whole society, having been thoroughly convinced of the stained, threatening, and evil nature of anything unfortunate enough to be, or to be referred to as, black, as an intended matter of courtesy refers to those of African extraction as “colored” or “Negro.”

The fact that “Negro” is the Spanish word for “black” is hardly understood, it would seem; or it would seem that the word “black” may be intimated or suggested, but never simply stated in good English.

Too many Negroes, if described or referred to as “black,” take it as an affront; and I was once told by a Canadian Irishman that I’d insulted him by referring to my person as a Black woman. He insisted that, in actuality, I was brown, not black; and I felt obliged to tell him he described himself as “white,” and that he wasn’t white either.

Yet, one is forced to conclude that this is not the case at all, that an astonishing proportion of the white population finds it discomforting that Blacks should dare to feel so much glory in being beautifully black. In the face of this kind of “reasoning,” the only conclusion one can logically come to is that there is something wrong with this society and its leadership. “The Man’s” opinion of God is sorry, to put it nicely, and his opinion of himself is simply vague and hazy.

No wonder the slogan “white is right” could take a whole nation by storm. One could never accuse this society of being rational.

Still, instead of this irrational society warping my delicate little psyche, it only drove me, ultimately, to the conclusion that any Black human being able to survive the horrendous and evil circumstances in which one inevitably finds oneself trapped must be some kind of a giant with great and peculiar abilities, with an armor as resistant as steel yet made of purest gold. My mother is one of the most courageous people I have ever known, with an uncanny will to survive. When she was a young woman, the white folks were much further in the lead than they are now, and their racist rules gave her every disadvantage; yet, she proved herself a queen among women, any women, and as a result will always be one of the great legends for me.

But strange as it is, I’ve heard it echoed by too many Black full-grown males that Black womanhood is the downfall of the Black man in that she (the Black woman) is “evil,” “hard to get along with,” “domineering” “suspicious,” and “narrow-minded.” In short, a black, ugly, evil you-know what.

As time progresses I’ve learned that this description of my mothers, sisters, and partners in crime is used as the basis for the further shoving, by the Black man of his own head into the sand of oblivion. Hence, the Black mother, housewife, and all-round girl Thursday is called upon to suffer both physically and emotionally every, humiliation a woman can suffer and still function.

Her head is more regularly beaten than any other woman’s, and by her own man; she’s the scapegoat for Mr. Charlie; she is forced to stark realism and chided if caught dreaming; her aspirations for her and hers are, for sanity’s sake, stunted; her physical image has been criminally maligned, assaulted, and negated; she’s the first to be called ugly and never yet beautiful, and as a consequence is forced to see her man (an exact copy of her, emotionally and physically), brainwashed and wallowing in self-loathing, pick for his own the physical antithesis of her (the white woman and incubator of his heretofore arch enemy the white man). Then, to add guilt to insult and injury, she (the Black woman) stands accused as the emasculator of the only thing she has ever cared for, her Black man. She is the scapegoat for what white America has made of the “Negro personality.”

Raped and denied the right to cry out in her pain she- has been named the culprit and called “loose,” “hotblooded,” “wanton,” “sultry,” and “amoral.” She has been used as the white man’s sexual outhouse, and shamefully encouraged by her own ego-less man to persist in this function. Wanting, too, to be carried away by her “Prince Charming,” she must, in all honesty, admit that he has been robbed of his crown by the very assaulter and assassin who has raped her. Still, she looks upon her man as God’s gift to Black womanhood and is further diminished and humiliated and outraged when the feeling is not mutual.

When a white man “likes colored girls,” his woman (the white woman) is the last one he wants to know about it. Yet, seemingly, when a Negro “likes white girls,” his woman (the Black woman) is the first he wants to know about it. White female rejects and social misfits are flagrantly flaunted in our faces as the ultimate in feminine pulchritude. Our women are encouraged by our own men to strive to look and act as much like the white female image as possible, and only those who approach that “goal” in physical appearance and social behavior are acceptable. At best, we are made to feel that we are poor imitations and excuses for white women.

Evil? Evil, you say? The Black woman is hurt, confused, frustrated, angry, resentful, frightened and evil! Who in this hell dares suggest that she should be otherwise? These attitudes only point up her perception of the situation and her healthy rejection of same.

Maybe if our women get evil enough and angry enough, they’ll be moved to some action that will bring our men to their senses. There is one unalterable fact that too many of our men cannot seem to face. And that is, we “black, evil, ugly” women are a perfect and accurate reflection of you “black, evil, ugly” men. Play hide and seek as long as you can and will, but your every rejection and abandonment of us is only a sorry testament of how thoroughly and carefully you have been blinded and brainwashed. And let it further be understood that when we refer to you we mean, ultimately, us. For you are us, and vice versa.

We are the women whose strong and beautiful Black bodies were—and are—still being used as a cheap labor force for Miss Anne’s kitchen and Mr. Charlie’s bed, whose rich, black, and warm milk nurtured—and still nurtures—the heir to the racist and evil slavemaster.

Who’re just too damned much for everybody.

We are the women whose bars and recreation halls are invaded by flagrantly disrespectful, bigoted, simpering, amoral, emotionally unstable, outcast, maladjusted, nymphomaniacal, condescending white women . . .in desperate and untiring search of the “frothing-at-the-mouth-for-a white-woman, strongbacked, sixty-minute hot black.” Our men.

We are the women who, upon protesting this invasion of our privacy and sanctity and sanity, are called “jealous,” and “evil,” and “small-minded,” and “prejudiced.” We are the women whose husbands and fathers and brothers and sons have been plagiarized, imitated, denied, and robbed of the fruits of their genius, and who consequently we see emasculated, jailed, lynched, driven mad, deprived, enraged, and made suicidal. We are the women whom nobody, seemingly, cares about, who are made to feel inadequate, stupid and backward, and who inevitably have the most colossal inferiority complexes to be found.

And who is spreading the propaganda that “the only free people in this country are the white man and the Black woman?” If this be freedom, then Heaven is Hell.

Buy Emancipated From Mental Slavery for only $5.99

A new age is dawning. Melanin is worth over $350 a gram more than gold. The Red, Black and Green flag will begin its 2nd century on August 13, 2020 and Marcus Garvey said, "We are going to emancipate ourselves from mental slavery, for though others may free the body, none but ourselves can free the mind."

A new age is dawning. Melanin is worth over $350 a gram more than gold. The Red, Black and Green begins its 2nd century on August 13, 2020 and we know now Marcus Garvey said, "We are going to emancipate ourselves from mental slavery, for though others may free the body, none but ourselves can free the mind.